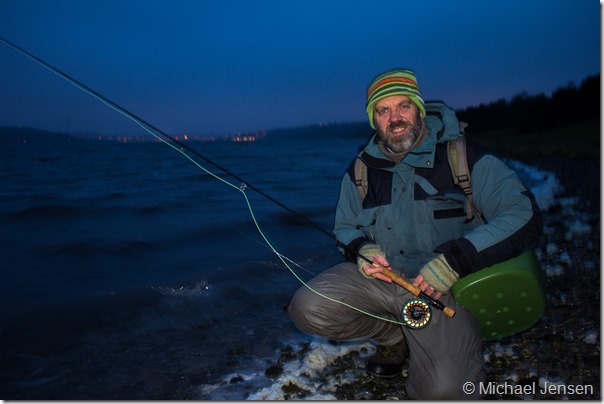 I had my first 2015 fishing trip today. It felt good to get out and clear my head (still rumbling a bit after New year’s eve) in the mild southwesterly wind. The Fjord was clear and ice free – and with a nice wave that gave me confidence in the project – which was catching a sea trout. And there were only a couple of hours of daylight left. Perfect conditions.

I tied a new pink fly on the tippet and started fishing. The wind was pretty fierce and came from my right shoulder. A bit challenging, being a right handed caster, but not really a big problem. The fly looked sexy in the dark and clear water.

I had only fished for a couple of minutes when the action started. I fished the fly in close and was about to make a roll cast to get the fly of the water, when the sea trout nailed the fly. I hate it when that happens. Trying to set the hook by pushing your rod forward into a roll cast seldom results in a firm hook set. Initially this seemed to be an exception. The fish took of… ripping line from my line basket with brutal force. 20 yards out it began stripping from the reel. So far so good, the brake sang a nice song of success.

Then I made a long distance release. Damn. The hook simply lost its hold.

Ok. Shit happens. No big deal… but… I really would have liked to see that fish up close before releasing it. Worst thing was: During the next hour this happened again… four times. The next trout weren’t really hooked. They just grabbed the fly and let go, when I tried to set the hook. 5 sea trout in less than 2 hours tried to eat my fly, and I blew it.

Maybe I was a bit slow today. Maybe the wing on my fly was too long. Maybe the trout were tricky. Maybe I should have used my usual intermediate line instead of the floating line I used today. Sitting on the bank in the dusk I tried to find answers – which seemed to be blowing in the wind… but slightly out of reach.

Anyway. First day of the year. Mild weather… no ice and lot’s of action. I think it’s gone be a fantastic season. Let’s get out and enjoy it.

Happy New Year and the best wishes for a fishy 2015