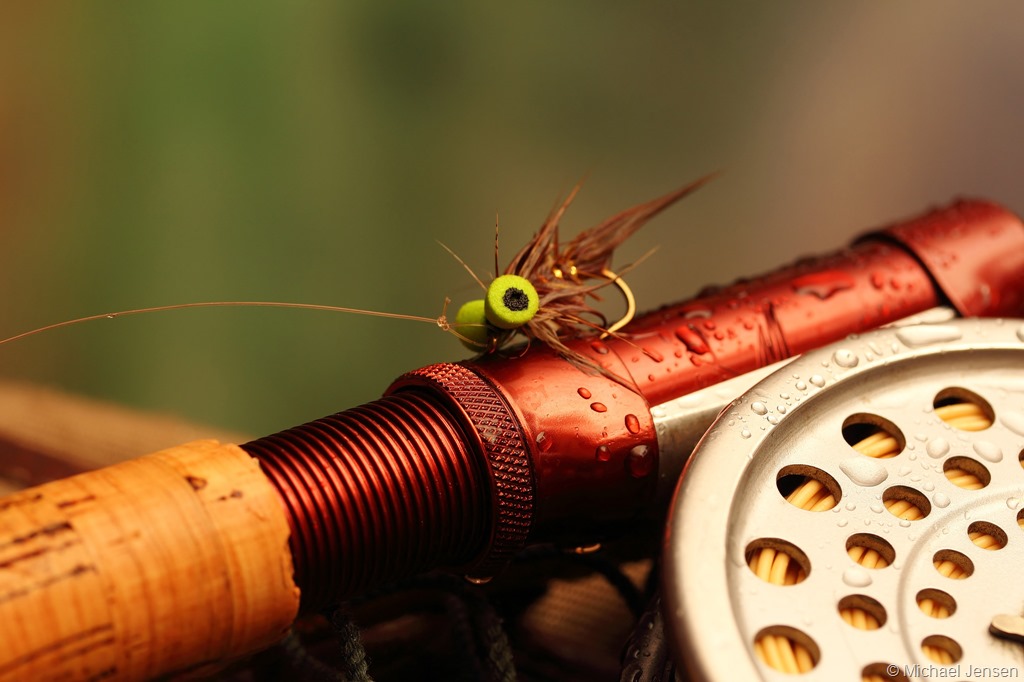 It has a funky name, it is kind of goofy looking – but it is one of the most efficient and consistently top producing flies for trout… and pretty much anything else that swims. So effective, actually, that it has been banned from some UK waters and continues to cause moral discussions.

The Booby Fly is not a pattern, it’s a tying style. You are able to tie most fly patterns in the booby style. Leaches, crayfish, baitfish, nymphs and pupaes are easily converted to Booby Flies.

The buoyancy of the Booby’s bulbous eyes gives this fly a unique and special action in the water. Furthermore lots of fly tying materials complement the fly’s lifelike qualities. The single most important point though, is how you fish these flies. Choosing the right fly line, leader and fishing technique is essential.

In this booklet you will learn how to tie 15 hot Booby Flies, learn how to choose the right tackle and get proven fishing techniques that just might change your fly fishing for trout permanently.

Too hot to be legal

The Booby Fly will take up real estate in your fly box, but it will do much more than that. It will show you a lot of new fishing techniques – and it will enable you to catch fish in places you probably haven’t considered before. And by the way… get over the giggling too. The name might be silly – but the fly is deadly.

One of the places where the Booby Fly really excels is when you are fishing deep structure – or near the bottom of rivers and lakes. The combination of a sinking line and a floating fly is the most efficient way to fish close to the bottom without hanging up.

This method has been popularized by British reservoir fly fishermen, especially in the winter, where large trout seek the warmer water close to the bottom near dam walls. The Booby Fly proved so effective, that some fishermen chose to leave the rod – while the Booby hung suspended inches above the bottom. When a fish took the fly it often hooked itself, and all you had to do was pull the fish in.

This rather unsporting method caused some fishery owners to forbid the use of Booby Flies. In my way of seeing things the flies didn’t do anything wrong – the fishermen did.

Read more on this subject in the chapter on hooks. There is however lots of other fishing situations, where a well fished Booby Fly will help you catch trout and other species like perch, panfish, bass and carp – depending on your geography. I will focus a lot on trout fishing in streams, rivers and lakes – but will also share my experiences with carp on the Booby Fly. But first of all, let´s take a back cast.

Who started this buzz anyway?

In 1987 UK Fly fisher and fly tier Gordon Fraser released the book, Mastering the Nymph. Frazer was frequently fishing the reservoirs Eyebrook and Rutland – and in his book he shared his approach to stillwater fishing.

His main focus was on fishing techniques, but along the way he shared some fly patterns of his own design. One of these was the first Booby Nymph. It was a small buzzer (midge larvae) pattern.

The large eyes were there, but there was no marabou tail or flashy chenille body. It was a simple and plain larvae or pupae pattern. Gordon explained how he fished this fly on a sinking line, and with a couple of ordinary buzzer flies as droppers. He had the whole concept in place: The bottom dragging line/floating fly idea. He wasn’t the first angler to use a buoyant fly. He might have been inspired by flies like Richard Walker’s Rasputin, Steve Parton’s Rassler and Bob Church’s Floating Corixa. All of these flies were designed for the sinking line/short leader approach. But they didn’t have the catchy name, and they didn’t get the tremendous success of the Booby Fly.

Read more about the Kindle version of the book here…

Read more about the ibook version of the book here…